Wakamizu rice, a cultivar known for producing excellent sake, was developed in Aichi Prefecture in 1985 and registered as a seedling. As a lowland cultivar, it adapts well to the climate of Usuki City. It melts easily during the brewing process and retains the rice’s flavour well. 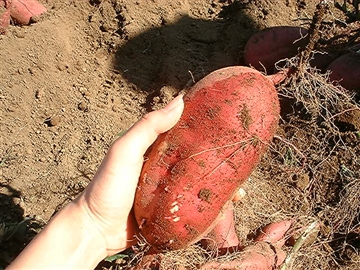 Due to its high sugar content, Kuge Honten uses the sweet potato Kanta-Kun for all its sweet potato shochu. The sweet potatoes are cultivated locally, here in the hills of Usuki City, Oita Prefecture.

A Kanta-Kun is a high-sugar sweet potato that has a sugar content 1.5 times that of normal sweet potatoes. This higher level of sweetness is achieved by specially storing Beni Haruka potatoes for 40 days after harvesting. Once this process is completed, the potatoes are shipped to market as Kanta-Kuns. The Oita Federation of Agricultural Cooperative Associations (ZEN NOH) have registered “Kanta-Kun” as a trademark. After consultation with ZEN NOH, Kuge Honten was given the trademark (Class 33 - sake, fruit liquor, etc - registration no. 5420082) for use in processing.

Naked barley, or hadaka barley is basically a type of barley with grains that thresh freely out of the husks or hulls found on normal covered barley. The naked barley that grows along the Setouchi coast is considered to be of very high-quality.

Rokujo barley is a 6-row barley. This simply refers to the arrangement of kernels when viewed from above. The six kernels are actually divided into three pairs. There is also another type of barley known as a 2-row barley that produces only one pair of kernels.

A New Variety of Barley - Toyonohoshi

Oita Prefecture has many shochu makers and they have to decide which barley, from the vast variety available, to use in their production. Recently, with an impetus on promoting Oita made shochu, there has been an increase in demand for home grown barley, produced here in Oita Prefecture.
As a result, Oita Prefecture and the Oita Prefecture and Sake Brewing Cooperative have been working jointly on the development of new varieties of barley. From this, Toyonohoshi was born.

With the arrival of autumn, various seasonal foods grace our table. For the people of Usuki City, there is one local speciality, its taste synonymous with the time of year, that is eagerly anticipated. This is the kabosu.

These days, the kabosu is cultivated all over Oita Prefecture and shipped to Tokyo, Fukuoka, and all around the Kansai region. But did you know that the original kabosu tree was in Usuki? It was located in a garden in Otomi Hibira, Usuki City. In March 1981, based on a survey in Oita Prefecture, it was judged to be “the original kabosu tree”. It was then designated as a special protected tree until its death in June 1987. In its prime it stood about 4 metres high with branches stretching out over 5 metres. Its trunk’s circumference, at its base (30cm from the ground) was 94cm and it was said to have been at least 300 years old.

It might have looked old, with 300 years of maturity etched into its bark, but its strong fragrance, as you would expect from the original tree, was that of the classic kabosu.
The tree’s owner’s family have lived in the area for generations and up until the Genroku era, it is said they were doctors and that they would use the kabosu to make cold medicine (taken from the Usuki City website).

More than 90% of all kabosus are produced here in Oita Prefecture. The Vitamin-C rich fruit is characterised by its tart, citrussy taste and refreshing aroma. If left to ripen, the yellow kabosu losses some of its sharpness, but none of its great taste!

*The photo shows a kabosu tree in early autumn (Kanchugen, Usuki City). During the autumn is when the trees can be found full of fruit.

*The picture shows the plums before the pickling process begins.