This is the pamphlet for Bungo Channel/Usuki's Local Fish (published by Usuki Umi no Honmamon Fisheries Promotion Council).
It’s full of information about Usuki’s fish, different kinds of dishes, and the fishing industry.
Feel free to have a look.

The Bungo Channel is the body of water off Usuki City, Oita Prefecture, that separates the islands of Kyushu and Shikoku. It is renowned for the high-quality of its tiger puffer fish (torafugu, pictured) that are adored by many people.

Usuki City’s slogan is “Fugu no Sato Usuki” (“The Hometown of the Puffer Fish”) and they are committed to providing fresh puffer fish of the highest quality. The shimmering puffer fish sashimi is prepared on the day, whilst it’s still alive, so it cannot be sliced very thinly; hence, thickly sliced puffer fish is a sign of freshness. In Usuki we are very particular about the portion size. We like to serve an ample amount so that everyone can take a piece without feeling guilty! (Taken from the Fugu No Sato Usuki homepage).

At Kuge Honten, we have been producing and providing sake that compliments this delicious fish, a sake that’s full of flavour. Many puffer fish restaurants use our sake, Ichinoide for their Hirezake (a drink that comprises of sake and the puffer fish’s fins). They are a great combination. 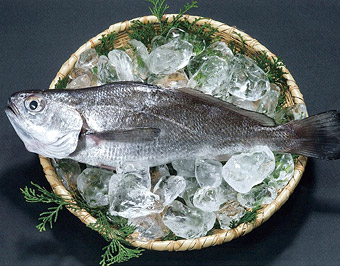 Kamagari (normally called kuroguchi) is a fish so delicious that we had to rename it! Traditionally in japan, many meals are served with rice and “kamagari” literally means to borrow (kari) a rice cooker (kama) - so then you can continue to enjoy this fantastic fish.
It’s fair to say that the kamagari is not the prettiest of fish, but when properly prepared it goes well with any dish and looks truly delectable. The people of Usuki have been eating this fish for generations.

When barracuda begins to grace our plates, we know autumn is on the way. Its white flesh has a wonderfully refined taste and in the autumn the catch is fattier making them all the more delicious.
We have a saying in Japan - ‘If you roast a barracuda, you’re going to need 1-sho (1.5kg) of rice!’ ? meaning it’s so delicious that you will want to keep on eating!
Of the blue and red varieties of barracuda, it is said the latter is the most delicious.

The area around Usuki Bay on the ria coast is a fantastic environment where red seabream flourish. The seabed is covered in reefs that serve as habitats where they can prey on small fish and crustaceans. Also, because of the bay’s vicinity to the Bungo Channel, the water moves quickly making the fish strong. As a result, the red seabream’s flesh is quite firm. The dense juicy white flesh is considered to be excellent for most dishes including sashimi, arai, soup, and is great when grilled or slow-cooked.